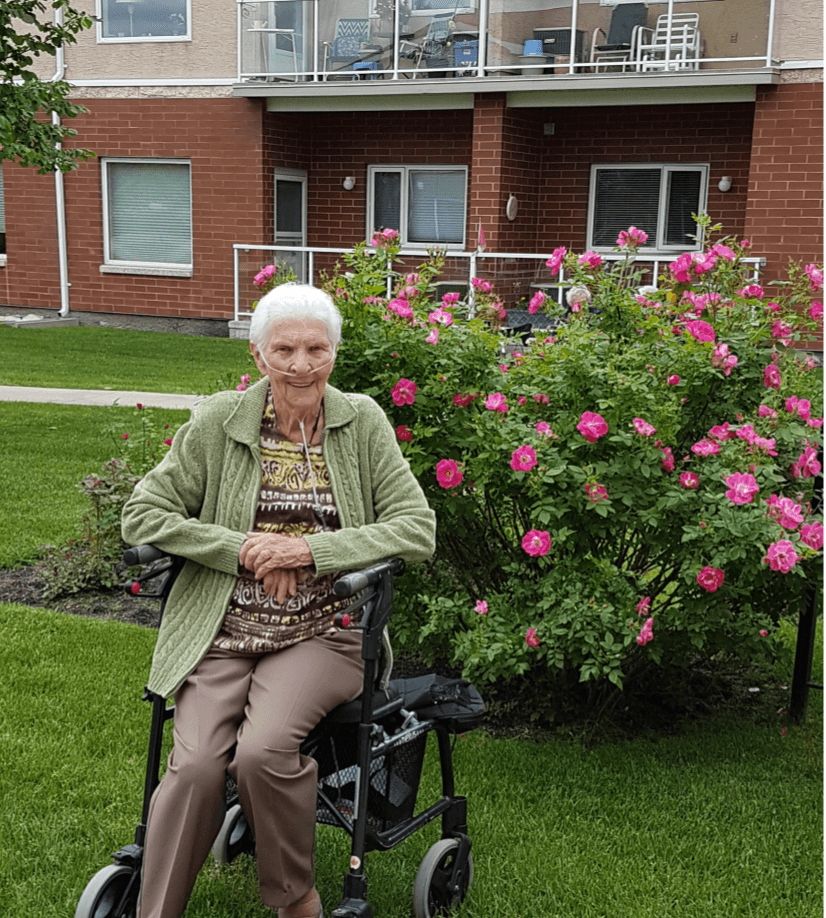 My mother has always had a garden. Sometimes her garden was big enough to be a market garden and sometimes just a little patch of earth, but under her care the garden always thrived. It was her place to connect with nature to contemplate and meditate.

My mother had her favorite plants. Tried and true, and dependable, those long-lasting marigolds, petunias, and geraniums had always met the criteria for her garden. They had to provide her with a kaleidoscope of changing patterns and endure a first fall frost. Once the vegetables were preserved and aligned magnificently against the pantry wall, she continued to nurture the flowers until forced, only by the first snowfall, to admit defeat.

My mom worked for long hours in her garden and failure of those plants to flourish was not an option. She worked against some pretty aggressive neighbours. The weeds that challenged the new arrivals never had much of an opportunity to travel too far or climb and choke out the young plants carefully removed without damaging the young or old plants – for sure it became a dedicated seasonal job.

Life in the garden also involved insects and my mom knows the good ones and the bad ones. Some of the good ones will attack the bad ones and she knew those characters too. Potato bugs are certainly bad ones more than a nuisance – seems the only predator they have is the gardener. It requires steely determination to pick them off the plants one by one and delivering them to a bucket where they could be destroyed. Left with this potato bug task while she went on a holiday was the most unqualified definitely substandard gardener of all, me.

All composure was lost which gave way to hysteria at my first site of those bugs. Ugly for sure, their large heads, long legs and striped bodies made my knees weak. Little black beady eyes, they crawled from one plant to the next for their greedy indulgence. I had to abandon the task until mom came home, really how much damage could they do? Well for all you who garden know, it turns out a lot in a very short time.

Two days later, once I summoned up enough courage to go back to the garden, the odor of raw potatoes filtered through my nostrils. The potato crop was completely defoliated and the bugs seemed to cease to exist. The potato patch had long, crooked green humanoid finger‐like stems extended from the earth overlooking the rest of her cheerful garden. When my mom came home she cultivated those plants back to a potato crop, although not quite a bumper crop.

My mom’s garden had other pests; some with beating hearts, others didn’t. Hail rain and dry seasons were challenging – and toy-balls smashing the plants were at times incarcerated until fence-mending could be resolved. That didn’t mean “fix my fence”; that meant, “Keep your ball on your side of the fence.”

One summer, my family came for a visit from Ottawa. Our dog had never seen cucumbers. Honestly, she had never seen a garden and like a spy infiltrating a new territory, she made it her undercover mission to terminate those intruding cucumbers. Sneaky by all accounts, but finally caught coming out from under the leaves with a cucumber in her mouth, throwing it on the grass, then going back for another of her enemies. Those enemies were found all over the yard damaged by her teeth because once in her mouth no degree of urgency could save them.

Then there were the birds. They ate the insects and also helped themselves to the raspberries and strawberries. Rabbits are very cute unless you have a garden – they ate anything that grew including the petunias.

My mom always shared with pride the bounty of her garden. Morag, her dog and garden team member took care of those rascally rabbits. Together they would retire to the lawn chairs at the end of their day. Admiring the garden as the sun lowered itself into an evening sky, they shared raspberries and would relax until tomorrow.

My mom’s garden offered her the contentment spoken in the words of Chief Dan George:

“May the stars carry your sadness away
May the flowers fill your heart with beauty
May hope forever wipe away your tears
And above all may silence make you strong.”

My mom is now in her 100th year. Her world has diminished, a constraint forced on by her age. But the sky is still endless and perpetually filled with stars. The seasons still bring the summer flowers stretching and strengthening life to full potential and with the love of the gardener for the new summer season.

My mom filled her summer garden with love.