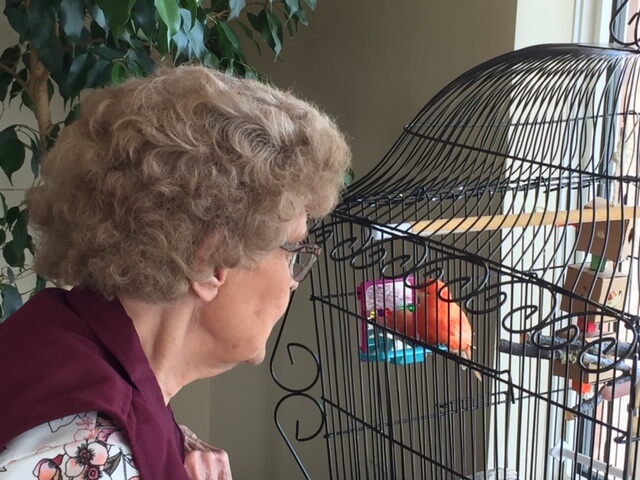 By Elaine Kroeker – Director of Recreation and Volunteers

For years the idea had fluttered across my mind, “Would the residents benefit from having a pet on site?”  Once I read the book Being Mortal, and the chapter called “A Better Life”,  by Atul Gawande and his story of the “glorious chaos”, I finally bought into the idea.   His theory is that many seniors are struggling with three plagues: helplessness, loneliness and boredom.  He says the cure for these afflictions is introducing plants, animals and children.  These cause a glorious chaos or also known as a “heightened environment”, that adds a reason to live, spontaneity, companionship and the opportunity to nurture.

Here at the Manor we started a conservatory room a few months ago, both a response to the stray plants that ended up finding their way to sun rooms and also, with the closing of Assiniboine Park Conservatory we needed a place to enjoy life during our harsh cold winter.  Within a few weeks of announcing the plant area we had twenty lovely plants, several which were blooming and some great green thumb volunteers offering to nurture those plants.

Our conservatory space still lacked something.  Thus began the research and hunt for the perfect pet.  We settled on the idea of getting a bird.  The day finally arrived and our Red Factor canary came home.  Much like most adoptions, the word spread around like wild fire.  The bird was put into its home late one evening.  As the sun came up, the early birds got a sneak peek.  One of the bird’s new neighbors commented that she had not dared to imagine it would be as beautiful as the pictures we had used to advertise it’s coming.  She said she had not wanted to be disappointed.  When she met the bird, she said it was more beautiful than she had imagined.  It was just perfect!  She also enjoys art and said she would love to just sit in this peaceful sanctuary and sketch the bird.

By lunch the first day, there were crowds filling the room to meet the new addition.  Many of them put their suggestions into our contest to name the bird.  In total over 80 names were submitted.  After getting to know the bird for a few weeks, we had a meeting with the volunteers and staff who care for the bird, to christen it with a name.

It was no easy task.  Do we give it a person’s name, a food name or something more pet like?  The idea was that the name also needed a melodious lilt and it needed more than one syllable.  After much deliberation it was decided we would call the bird Fanta, as it’s the same color as the favorite old drink.  Before long,  staff were singing the Fanta commercial and announcements were being made by residents at programs.

The winner who chose the name is a new resident, who claimed she had never won anything before.  She was thrilled with the prize she won, a bird candy dish filled with Easter eggs.

Fanta continues to draw residents and their visitors of all ages.  It’s not unusual to hear chirping, whistling and coaxing when I walk by the conservatory room.  When I peek in, I see a resident hunched up right next to the cage and the bird’s beak up to the cage, conversing.  It’s our belief that Fanta will bring companionship, spontaneity and an opportunity for seniors to nurture their feathered friend for many years to come.